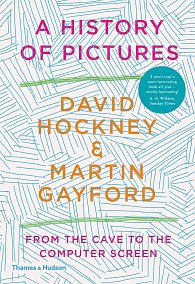 A History of Pictures: From the Cave to the Computer Screen (ENG)

A History of Pictures: From the Cave to the Computer Screen

A new, compact edition of David Hockney and Martin Gayford’s brilliantly original book, with a revised final chapter and three entirely new Hockney artworks. I wont read a more interesting book all year ... utterly fascinating --AN Wilson, The Sunday Times Informed and energized by a lifetime of painting, drawing and making images with cameras, David Hockney, in collaboration with the art critic Martin Gayford, explores how and why pictures have been made across the millennia. What makes marks on a flat surface interesting? How do you show movement in a still picture, and how, conversely, do films and television connect with old masters? Juxtaposing a rich variety of images – a still from a Disney cartoon with a Japanese woodblock print by Hiroshige, a scene from an Eisenstein film with a Velázquez painting – the authors cross the normal boundaries between high culture and popular entertainment, and make unexpected connections across time and media. Building on Hockney’s groundbreaking book Secret Knowledge, they argue that film, photography, painting and drawing are deeply interconnected. Insightful and thought provoking, A History of Pictures is an important contribution to our appreciation of how we represent our reality. This new edition has a revised final chapter with some of Hockney’s latest works, including the stained-glass window in Westminster Abbey. Read More A magic flight of a book … It’s a measure of Hockney’s vividness of perception that he can always put a cap on Gayford’s knowledge … Fabulous! Clive James, Guardian Enormously good-humoured and entertaining… Hockney asks big questions about the nature of picture-making and the relationship between painters and photography in a way that no other contemporary artists seems to Andrew Marr, New Statesman An eloquent conversational testimony to the vividness of life lived through intelligent looking. You will see Caravaggio and Citizen Kane with fresh eyes Daily Telegraph Crisps up perceptions and help readers to look anew The Times Contents List 1. Pictures, Art and History 2. Pictures and Reality 3. Making Marks 4. Shadows 5. Picturing Space and Time 6. Brunelleschi’s Window and Alberti’s Mirror 7. Mirrors and Reflections 8. Paper, Paint and Multiplying Pictures 9. Painting the Stage and Staging Paintings 10. Caravaggio and the Academy of the Lynx-Eyed 11. Vermeer and Rembrandt: the Hand, the Lens and the Heart 12. Truth and Beauty in the Age of Reason 13. The Camera Before and After 1839 14. Photography, Truth and Painting 15. Painting with and without Photography 16. Snapshots and Moving Pictures 17. Movies and Stills 18. The Unending History of Pictures About the Author David Hockney is considered one of the most influential British artists of the 20th century. He has produced work in almost every medium - painting, drawing, stage design, photography and printmaking - and has stretched the boundaries of all of them. Born in Bradford, England, in 1937, Hockney attended art school in London before moving to Los Angeles in the 1960s. There, he painted his famous swimming pool paintings. In a 2011 poll of more than 1,000 British artists, Hockney was voted the most influential British artist of all time. He continues to create and exhibit art.Martin Gayford is art critic for The Spectator and the author of acclaimed books on Van Gogh, Constable and Michelangelo. He is the author of Man with a Blue Scarf, Rendez-vous with Art and A Bigger Message. He has collaborated with David Hockney on A Bigger Message: Conversations with David Hockney and A History of Pictures, and has co-written a volume of travels and conversations with Philippe de Montebello: Rendez-vous with Art.