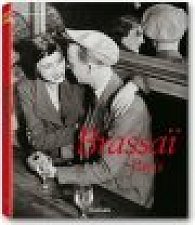 "Brassa&#239; is a living eye," wrote Henry Miller of the Hungarian–born artist who adopted Paris after World War I and became one of its most celebrated photographers. Originally a painter before he moved on to writing, sculpture, cinema and, most famously, photography, Brassa&#239; (1899-1984) was a member of Paris`s cultural elite, counting Miller, Picasso, Sartre, Camus, and Cocteau, among his friends. Camera in hand, he scoured the streets and bars of Paris, unabashedly capturing the city`s inhabitants in their natural habitats. Prostitutes, hoodlums, and other ‘marginal` characters were the most famous heroes of Brassa&#239;`s moody, gritty photographs taken often by night. Including an extensive selection of Brassa&#239;`s finest photographs and an essay describing his life and work, this book explores the world of Brassa&#239; in thematic chapters: Minotaure magazine, Paris at Night, Secret Paris, Day Visions, Artists of My Life, and Graffiti and Transmutations.