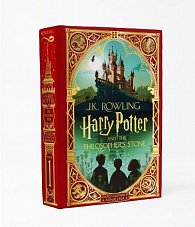 An irresistible new edition of Harry Potter and the Philosopher's Stone created with ultra-talented designers MinaLima, the design magicians behind the gorgeous visual graphic style of the Harry Potter and Fantastic Beasts films. J.K. Rowling's complete and unabridged text is accompanied by MinaLima's handsome colour illustrations on nearly every page, superb design, and eight exclusive interactive paper-engineered elements - including Harry's Hogwarts letter, the magical entrance to Diagon Alley, a sumptuous feast in the Great Hall of Hogwarts and more. Designed and illustrated by the iconic house of MinaLima - best known for establishing the graphic design of the Harry Potter and Fantastic Beasts films - this is the perfect gift for Harry Potter fans and a beautiful addition to any collector's bookshelf, enticing readers of all ages to discover the Harry Potter novels all over again. About the Author J.K. Rowling is the author of the record-breaking, multi-award-winning Harry Potter novels. Loved by fans around the world, the series has sold over 500 million copies, been translated into 80 languages, and made into 8 blockbuster films. She has written three companion volumes in aid of charity: Quidditch Through the Ages and Fantastic Beasts and Where to Find Them (in aid of Comic Relief and Lumos), and The Tales of Beedle the Bard (in aid of Lumos), as well as a film script inspired by Fantastic Beasts and Where to Find Them, which marked the start of a five-film series to be written by the author. She has also collaborated on a stage play, Harry Potter and the Cursed Child Parts One and Two, which opened in London's West End in the summer of 2016 and on Broadway in early 2018. In 2012, J.K. Rowling's digital company Pottermore was launched, where fans can enjoy news, features and articles, as well as original content from J.K. Rowling. She has also written The Casual Vacancy, a novel for adult readers, and the Strike crime series, written under the pseudonym Robert Galbraith. As well as receiving an OBE for services to children's literature, she has received many awards and honours, including an OBE and Companion of Honour, France's Legion d'honneur, and the Hans Christian Andersen Award. MINALIMA DESIGN is an award-winning graphic design studio founded by Miraphora Mina and Eduardo Lima, best known for their ten-year involvement in the Harry Potter film franchise, where they established the visual graphic style of the film series. From their London studio they have continued telling stories through visuals from designing books and packaging to creating graphic props for films such as Sweeney Todd (2007), The Imitation Game (2014), and the Fantastic Beasts films. They also designed the bestselling books The Case of Beasts: Explore the Film Wizardry of Fantastic Beasts and Where to Find Them, The Archive of Magic: Explore the Film Wizardry of Fantastic Beasts: The Crimes of Grindelwald, J.K. Rowling's screenplays for the Fantastic Beasts films, Peter Pan, The Jungle Book, Beauty and the Beast, The Little Mermaid and Other Fairy Tales, The Secret Garden, Alice's Adventures in Wonderland, and The Adventures of Pinocchio.