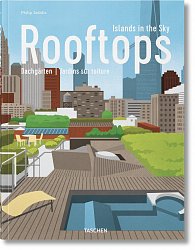 Rooftops. Islands in the Sky

Rooftops. Islands in the Sky

As urban living intensifies in density and numbers, the city landscape expands both outwards and upwards. Architects and urban designers craft new and experimental structures while also investigating existing buildings for potential reinvention or expansion. In particular, the roof of a building, once a perfunctory structural element, is now a city space in and of itself, beloved for the capacity to eke out further room for living or to craft inspiring refuges away from the bustle of the metropolis. This international selection of urban rooftops catalogs a new urban dimension. Through over 50 bars, restaurants, temporary art installations, and gardens, it testifies to the variety of intelligent and exuberant designs that grace city summits from Sydney to Hong Kong, Oslo to Chicago. Whether it’s the panoramic views, the exposure to the elements, or a slight giddiness that comes with height, we see just how the roof has nurtured not only architectural invention but a whole new facet and thrill to city living. Just like its predecessors Tree Houses and Cabins, Urban Rooftops features both brilliant photography and bright contemporary illustration from Boyoun Kim. As with all books in TASCHEN’s architecture series, it also celebrates both the established and the rising talents of the industry. Featured artists in this movement towards the skies include Pritzker Prize winners Norman Foster and Shigeru Ban, Jeffrey Inaba, Julien De Smedt (JDS), and landscape designers such as Ken Smith and Vladimir Djurovic. &nbsp; The illustrator Boyoun Kim was born in Korea and studied illustration at the School of Visual Arts in New York. Her work has been showcased by the American illustration society, the Society of Illustrators, and has featured in a number of publications including The New York Times, The New Yorker, and The Washington Post. The author Philip Jodidio (born 1954) studied art history and economics at Harvard, and edited Connaissance des Arts for over 20 years. His books include TASCHEN’s Architecture Now! series, and monographs on Tadao Ando, Norman Foster, Renzo Piano, Jean Nouvel, and Zaha Hadid. He is internationally renowned as one of the most popular writers on the subject of architecture.