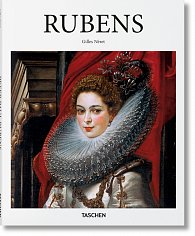 A painter of dramatic battles as much as erotic mythologies, Sir Peter Paul Rubens was a key figure in the 16th-century art world and a flag bearer for Baroque color, motion, and sensuality. His prolific oeuvre includes altarpieces, portraits, landscapes, historical paintings, as well as his famous, bountiful nudes. There are over 1,000 catalogued works by Sir Peter Paul Rubens (1577–1640), the 16th-century flag bearer for Baroque drama, movement, and sensuality. This essential introduction takes in the most important works from this astonishingly prolific oeuvre to explore Rubens’s influences and innovations, and his remarkable visual, and art historical, impact. The richly illustrated survey takes in Rubens’s portraits, landscapes, and historical paintings, as well as his famed and bountiful nudes. Along the way, we examine the artist’s astonishing technique and his deft ability to depict narrative in a compelling and legible visual form, whether an erotic mythological scene or a tender biblical story. This remarkable artistic bravura is placed in context both within Rubens’s long art historical legacy through Van Dyck, Velázquez, and beyond, and his other talents as a classical scholar, diplomat, and knight. The author Gilles Néret (1933–2005) was an art historian, journalist, writer, and museum correspondent. He organized several art retrospectives in Japan and founded the SEIBU Museum and the Wildenstein Gallery in Tokyo. He directed art reviews such as LŒil and Connaissance des Arts and received the Élie Faure Prize in 1981 for his publications. His TASCHEN titles include Salvador Dalí: The Paintings, Matisse, and Erotica Universalis.