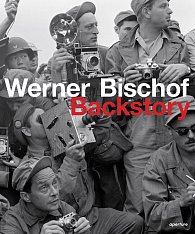 This new monograph captures the life and work of a Magnum great, Werner Bischof, and features his most iconic images, as well as insight into his life as a photojournalist and artist. Known for his postwar social documentary work, Bischof was inspired to become a journalist after the ruin of World War II left him unable to be a passive observer. He traveled documenting both the suffering of the postwar world and the day-to-day life within traditional cultures affected by industry and technology. This expansive collection, edited by the photographer’s son, brings together these photographs, organized geographically—Europe, India, Japan and Korea, Hong Kong, Indochina, and North and South America. Accompanying the photographs are the contact sheets, letters, diaries, and sketches that give an intimate glimpse into his creative process, revealing the highlights, struggles, and his vulnerability. The book encapsulates Bischof’s far-reaching search for human connection through storytelling and is a testament to his relentless obsession to find harmony and beauty. In the words of Simon Maurer, “his photographs open up worlds.” And true to this quote, this book provides a time capsule of the postwar world, opened up by the compelling and profound story of the life of this adventurous artist.Werner Bischof (born in Zurich, 1916, ; died in Peru, 1954) opened a photography and advertising studio before becoming a freelance photojournalist and traveling internationally. He received high recognition for his coverage of World War II and in 1949 became one the first members of Magnum. While photographing in the Andes, he died tragically at the age of thirty-eight.Marco Bischof (text) Werner Bischof’s son, is a documentary filmmaker, editor, and author who has dedicated much of his career to telling his father’s story. His films and books include Werner Bischof: 1916–1954: His Life and Work (1990), and Questions To My Father (2004).Fred Ritchin (preface), is professor and associate chair of the Department of Photography and Imaging at New York University’s Tisch School of the Arts, and codirects the Photography and Human Rights Program at NYU with the Magnum Foundation. He is also director and cofounder of PixelPress, which works with humanitarian groups to develop visual projects dealing with social justice issues. Ritchin has written for Aperture, Le Monde, the New York Times, and the Village Voice, and authored several books, including the prescient In Our Own Image: The Coming Revolution in Photography (Aperture, 1990, 2000) and the more recent After Photography (2009) and Bending the Frame (2013).